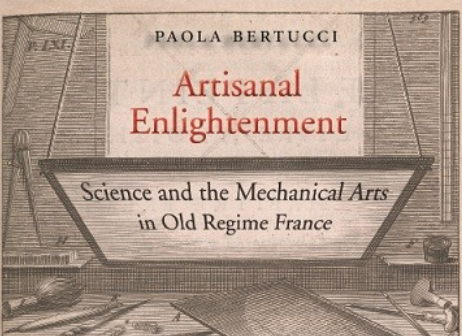 April 11, 2019
At its 50th Annual Meeting, held March 21-23 in Denver, Colorado, the American Society for Eighteenth-Century Studies conferred two book awards to outstanding scholars of the period.
The 2018-2019 Gottschalk Prize
ASECS awards the Louis Gottschalk prize annually to the best scholarly book on an eighteenth-century subject. In 2019, the Gottschalk Prize has been given to Paola Bertucci, associate professor of history and the history of medicine at Yale University, for Artisanal Enlightenment: Science and the Mechanical Arts in Old Regime France, published by Yale University Press. Bertucci’s deeply researched, subtle, and engaging study restores voice and agency to the craftsperson who combined technical skill in the mechanical arts with the intellectual quality of esprit. This study demonstrates the qualities and contributions of craftspeople to the Enlightenment and thus challenges us to rethink our hierarchy of Enlightenment values which divides application from both pure knowledge and creativity, a hierarchy moreover that resonates into our time. Complicating this divide, Bertucci reveals the importance of practical knowledge, a kind of hands-on material experience, that could be enhanced but not displaced by theoretical knowledge. She identifies such practitioners with the term l’artiste, a figure she develops through exploring the archive of the Société des Arts, an association that flourished during the 1730s.
As Bertucci examines the efforts of surgeons, geometers, engineers, clockmakers, and engravers to redefine the status of their crafts, she shows that their contributions reach beyond their fields to help constitute the concepts and project of such monuments of the Enlightenment as the Encylopédie. Artisanal Enlightenment does what the best books in any field do; its historical research and keen analysis convincingly reframe and transform our conception of what the Enlightenment really was. What counted as “art” for the people who were actually building out the Enlightenment was far richer and deeper than we had imagined.
The American Society for Eighteenth-Century Studies is a not-for-profit educational organization founded to promote the study of all aspects of the eighteenth century. It sponsors conferences, awards fellowships and prizes, and publishes Eighteenth-Century Studies and Studies in Eighteenth-Century Culture.
https://www.18thcenturysociety.org/