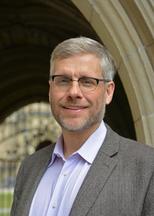 Professor Winroth specializes in the history  of medieval Europe, especially religious, intellectual and legal history as well as the Viking Age. He teaches both halves of the survey lecture course in medieval history, seminars in religious, legal, intellectual, and Scandinavian history.  His new book, The Conversion of Scandinavia: Vikings, Merchants, and Missionaries in the Remaking of Northern Europe, argues for a radically new interpretation of the conversion of Scandinavia from paganism to Christianity in the early Middle Ages (Yale Press, December 2011).

In 2003, Winroth was named a MacArthur Fellow by the John D. and Catherine T. MacArthur Foundation, which honors individuals for the originality and creativity of their work and the potential to do more in the future. MacArthur Fellows receive $500,000 in support over five years. The funding can be used in any way the recipients choose.

Winroth published The Making of Gratian’s Decretum in 2000. The Decretum was the first scholastic canon law textbook produced in the Middle Ages.

Winroth is credited with showing that manuscripts previously thought to be abbreviations of the standard text are actually early versions of the text. “This painstaking analysis would have been impossible absent his mastery of canon law, command of medieval Latin, and aptitude for paleographic reconstruction of materials that exist primarily in the form of unedited medieval manuscripts,” the MacArthur Foundation stated. “By reversing the chronology of the earliest publications in canon law, Winroth opens new avenues for interpreting its origins and development.”

Professor Jon Butler, former chair of the History Department, said, “Anders is a simply stunning scholar and wonderfully warm, humane person. His ingenuity and discipline flow naturally out of a personal graciousness that makes him a marvelous teacher and colleague. By honoring our most creative, path-breaking scholars, MacArthur Fellowships remind us all of academia’s principal purpose—the pursuit of knowledge and learning in the pursuit of truth and human dignity.”

Winroth, who learned of his honor through a surprise phone call from the MacArthur Foundation, was one of 24 MacArthur Fellows for 2003.

“To receive this fellowship, many people must have believed in my potential to do more things,” Winroth said. “There are people out there who must have recommended me, others who evaluated my work. I have a responsibility to them and to the foundation now.”

In 2003, Winroth’s book on the Decretum was awarded the Samuel and Ronnie Heyman Prize for Outstanding Scholarly Publication by Yale University. Then Dean of Yale College Richard H. Brodhead motivated the award: “In the judgment of the referees, the book is a remarkable piece of hard-headed academic detective work that changes our understanding of the Middle Ages in a significant way.” The book was also given the prestigious John Nicholas Brown Prize by the Medieval Academy of America in 2004.

Winroth is co-editor of Canon Law, Religion, and Politics: Liber Amicorum Robert Somerville (2012) and Charters, Cartularies, and Archives: The Preservation and Transmission of Documents in the Medieval West (2002). His research is focused on the cultural, intellectual and legal history of the European High Middle Ages and on the economic and social history of early medieval Scandinavia.

Winroth received his Ph.D. from Columbia University in 1996 and was the Sir James Knott Research Fellow at the University of Newcastle-upon-Tyne 1996-1998. He joined the Yale faculty as an assistant professor in 1998, was promoted to associate professor in 2003 and to full professor in 2004. He was the chair of the Medieval Studies Program 2005-2007.