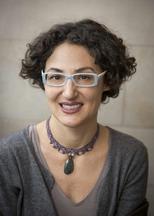 Barbara is a student in the History Department and in the History of Science and Medicine Program. Her academic interests include the history of science and technology, the history of medicine (in particular medicines and apothecaries), and the history of cross-cultural exchanges in the Mediterranean in early modern Europe, social and material history. Her dissertation focuses on the medicines culture and market in early modern Italy, using theriac—the most famous drug in the Western world up to the nineteenth century—as a case study.

In 2015, she was awarded the Jerry Stannard Memorial Award for the History of Pharmacy and the Annals of Science Essay Prize for Craft, money and mercy: an apothecary’s self-portrait in sixteenth-century Bologna (free access). Her work has also been funded by the MacMillan Center for International and Area Studies at Yale.

She holds a degree in Early Modern History from the University of Bologna. Her book-length thesis, Naples and the Turks in the Eighteenth Century, analyzed diplomatic sources from an ethnological perspective. Before coming to Yale, she worked as an editor for the two major educational publishers in Italy—Zanichelli and Mondadori Education—and helped publish some of the best-selling history textbooks in Italy.