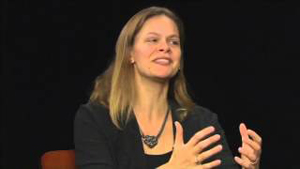 Yale historian Beverly Gage will be an eyewitness to history when she provides live coverage of President Obama’s second inauguration for “PBS NewsHour” on Monday, Jan. 21.

Gage has often provided commentary on the evening program, and she is frequently cited on the “NewsHour” blog for her perspective on current news and political trends. The subjects on which she has offered insight include the dramatic increase in the number of women elected to Congress, the political implications of the Occupy Wall Street movement, and the congressional conflict over the debt ceiling debate.

Gage, a 1994 graduate of Yale College, has extensive experience as a journalist, having  contributed to publications such as The New York Times, The Nation, Slate,  and the Washington Post.

She was also a featured guest on @YaleLive in the lead-up to the presidential election. Watch the video.

Gage will join two other historians and the political analysts Mark Shields and David Brooks in covering the inauguration on Jan. 21 in a live special from 11 a.m. to 1 p.m. (EST) and in the regular “NewsHour” broadcast in the evening.