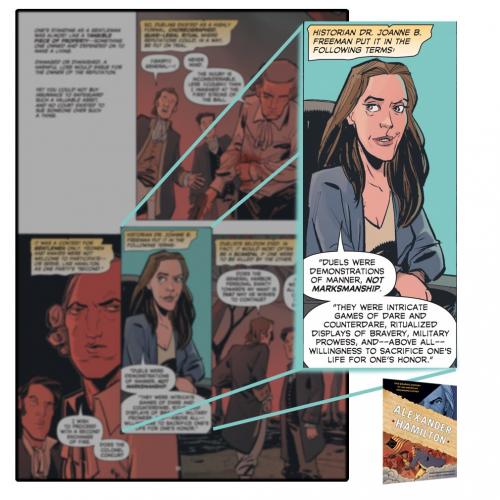 A new graphic novel by Jonathan Hennessey, with artwork by Justin Greenwood will be published this month, Alexander Hamilton: The Graphic History of an American Founding Father is due out August 8th from Ten Speed Press.  Our very own Joanne Freeman is featured as the only modern individual depicted in the book.

Hennessey, a credentialed reader at the Huntington Library during his research on the book, explains that he owes a great deal to many working historians and popular biographers, but no other contemporary historian is actually featured and illustrated in the book.

“I found Dr. Freeman’s book Affairs of Honor: National Politics in the New Republic so absolutely instrumental in trying to grasp and explain the institution of dueling to my own readers,” notes Hennessey.

“Dr. Freeman’s course on the American Revolution—and, I should point out, Dr. David Blight’s on the American Civil War—both generously made available by Yale as free digital content, have also both contributed massively to my U.S. history education.  It was an absolute delight to find Dr. Freeman so pleased at the novelty of seeing herself in a graphic novel.”
Professor Freeman is very excited about the cameo and can only describe it as “super cool” to find herself in the panels of a graphic novel.
The book can be pre-ordered at hamiltongraphicnovel.com.