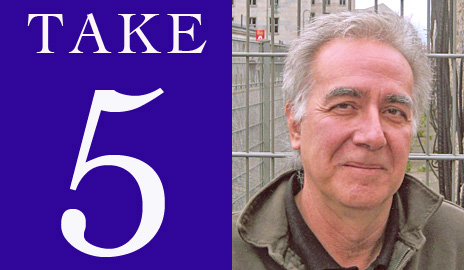 Take 5 offers a brief introduction to Yale faculty members in a Q&A format. The featured faculty member selects 5 out of 10 questions to answer.

Any opinions shared are not necessarily those of YaleNews.

Carlos Eire ’79 Ph.D., the T. Lawrason Riggs Professor of History and Religious Studies, focuses his teaching and scholarship on the religious history of early modern Europe. His books include “From Madrid to Purgatory: The Art and Craft of Dying in Sixteenth-Century Spain” and “A Very Brief History of Eternity,” as well as two memoirs: “Waiting for Snow in Havana”  — winner of the 2003 National Book Award in Nonfiction — which describes his years growing up in Cuba until he was airlifted out of the country in 1962 as part of Operation Peter Pan, and “Learning to Die in Miami,” which explores the exile experience. “Waiting for Snow in Havana” has been translated into more than a dozen languages, but is banned in Cuba.

What scholarly/research project are you working on now?

A history of the impossible: attitudes toward miracles in the early modern age. The 16th century was the first time in human history when the possibility of miracles was seriously questioned. Yet, this was also the time when some of the most extreme claims were made for supernatural phenomena. The basic question I confront in this project is this: how should historians deal with events considered very “real” in the past that are nowadays thought to be impossible?

What world problem would you fix, if you could?

First: to bring an end to the repressive, soul-crushing, totalitarian communist utopianism that continues to flourish in China, Vietnam, North Korea, Venezuela, and many other countries, including my own native land, Cuba. Second: to successfully bring to justice all so-called intellectuals who praise such repressive regimes, and to see them prosecuted for crimes against humanity, along with the tyrants idolized by them.

What do you do for fun?

Is there something you’ve always wanted to do — either professionally or personally — that you haven’t yet?

The list is way too long. I will never have enough time to come to the end of it, even if I live for another thousand years. At the very top of the list right now, at this point in life: becoming an expert architect, engineer, carpenter, plumber, electrician, mason, and lumberjack, so I never again have to hire a contractor to do repairs on my home.

What person, living or dead, would you like to spend a day with?