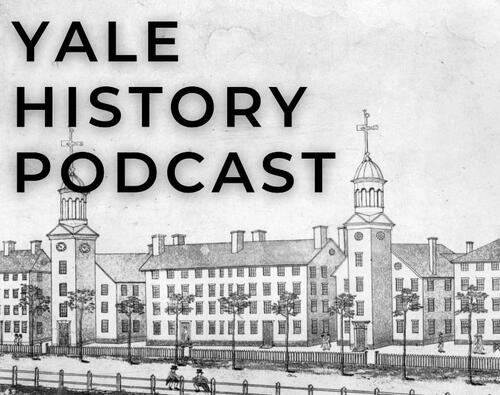 April 19, 2022
The Yale History podcast is a new project at the History Department at Yale University that will present a series of interviews with historians from our department on a wide range of historical topics based on their research and expertise. You can find these and future episodes on the Yale History Podcast playlist on Yale’s Soundcloud or listen with the player below.
Episode 6:  New Lefts with Terence Renaud
In his book, New Lefts: The Making of a Radical Tradition, Terence Renaud argues that a basic continuity existed between three moments in the history of the German and Western European left: radical antifascism in the 1920s-30s, left socialism in the 1940s-50s, and anti-authoritarianism in the 1960s. In the 1960s, the radical youth of Western Europe’s New Left rebelled against the democratic welfare state and their parents’ antiquated politics of reform. It was not the first time an upstart leftist movement was built on the ruins of the old. Renaud demonstrates why the left in Europe underwent a series of internal revolts against the organizational forms of established parties and unions. He describes how small groups of militant youth such as New Beginning in Germany tried to sustain grassroots movements without reproducing the bureaucratic, hierarchical, and supposedly obsolete structures of Social Democracy and Communism. Neoleftist militants experimented with alternative modes of organization such as councils, assemblies, and action committees. However, Renaud reveals that these same militants, decades later, often came to defend the very institutions they had opposed in their youth.
Providing vital historical perspective on the challenges confronting leftists today, this book tells the story of generations of antifascists, left socialists, and anti-authoritarians who tried to build radical democratic alternatives to capitalism and kindle hope in reactionary times. Over the course of our conversation we will talk not just about Prof. Terence Renaud’s revisionist periodization of the emergence of the “New Left” beyond the Long Sixties, but also the broader intellectual and political stakes of this history for antisystemic and anti-capitalist mobilization today.
Terence Renaud is a historian of modern Europe who specializes in German intellectual history, revolutions, and international social movements. He is currently a lecturer in the Humanities Program and Department of History at Yale University. At Yale he teaches in Directed Studies and offers interdisciplinary seminars on European intellectual history, theories and practices of resistance, and modern revolutions. He received his
Ph.D. in history with an emphasis on critical theory from the University of California, Berkeley. Renaud’s work has appeared in academic journals such as Modern Intellectual History, The Historical Journal, and New German Critique as well as popular magazines such as the Los Angeles Review of Books and Foreign Policy. His new research project concerns the visual history of capitalism in Europe and North America, as represented in cartoons, caricatures, and other images of social hierarchy around the turn of the twentieth century.
Episode 7: Humane: How the United States Abandoned Peace and Reinvented War with Samuel Moyn
In Humane: How the United States Abandoned Peace and Reinvented War, Samuel Moyn asks a troubling but urgent question: What if efforts to make war more ethical—to ban torture and limit civilian casualties—have only shored up the military enterprise and made it sturdier? To advance this case, Moyn looks back at a century and a half of passionate arguments about the ethics of using force. In the nineteenth century, the founders of the Red Cross struggled mightily to make war less lethal even as they acknowledged its inevitability. Leo Tolstoy prominently opposed their efforts, reasoning that war needed to be abolished, not reformed—and over the subsequent century, a popular movement to abolish war flourished on both sides of the Atlantic. Eventually, however, reformers shifted their attention from opposing the crime of war to opposing war crimes, with fateful consequences.
The ramifications of this shift became apparent in the post-9/11 era. By that time, the US military had embraced the agenda of humane war, driven both by the availability of precision weaponry and the need to protect its image. The battle shifted from the streets to the courtroom, where the tactics of the war on terror were litigated but its foundational assumptions went without serious challenge. These trends only accelerated during the Obama and Trump presidencies. Even as the two administrations spoke of American power and morality in radically different tones, they ushered in the second decade of the “forever” war. Over the course of our conversation we will talk not just about Prof. Samuel Moyn’s revisionist historicization of the emergence of “humane war,” but also the broader intellectual and political stakes of this category in US foreign policy.
Samuel Moyn is Henry R. Luce Professor of Jurisprudence at Yale Law School and Professor of History at Yale University. He received a doctorate in modern European history from the University of California-Berkeley in 2000 and a law degree from Harvard University in 2001. He came to Yale from Harvard University, where he was Jeremiah Smith, Jr. Professor of Law and Professor of History. Before this, he spent thirteen years in the Columbia University history department, where he was most recently James Bryce Professor of European Legal History. His areas of interest in legal scholarship include international law, human rights, the law of war, and legal thought, in both historical and current perspective. In intellectual history, he has worked on a diverse range of subjects, especially twentieth-century European moral and political theory. He has written several books in his fields of European intellectual history and human rights history, including The Last Utopia: Human Rights in History (2010), Christian Human Rights (2015) and Not Enough: Human Rights in an Unequal World (2018)

Professors Moyn and Renaud discuss their work with Kelvin Ng, a PhD candidate at the Yale History Department and historian of the modern Indian Ocean. Kelvin’s research interests include intellectual history, political economy, and histories of the left.