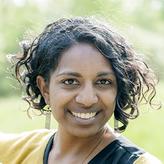 Bio:
Chitra Ramalingam is a historian of science and historian of photography. She received her PhD in History of Science from Harvard University in 2009, after a BA in Physics and Philosophy from Harvard and an MPhil in History and Philosophy of Science from the University of Cambridge. She was a British Academy postdoctoral research fellow at the University of Cambridge before arriving at Yale. Her research, teaching, and curatorial work range broadly across topics in science and visual/material culture, with a particular focus on the visual culture of physics (19th and 20th centuries); on 19th-century “ways of seeing” (especially optical illusions, optical toys, and the pre-history of cinema); the early history of photography;  changing discourses about photography as “art” or “science”; and decolonial museum practice.
Her first book, To See a Spark: Experiment and Visual Experience in Victorian Science (under contract with Yale University Press), uses the history of a single scientific object, the electric spark, to track how physicists managed their visual experience in the laboratory. The book traces an unfamiliar path across the scientific and visual landscape of Victorian Britain, in which the physics laboratory is a key site for experimentation on human vision and for the exploration of new media like photography and cinema.
Her work on the history and theory of early photography explores the reasons and context for the medium’s ambiguous place between science and art from 1839 to the present day. Does the history of photography look any different when we approach it from the perspective of the cultural history of science? She co-edited a volume of essays by art historians and historians of science on the photographic pioneer and Victorian gentleman of science William Henry Fox Talbot, William Henry Fox Talbot: Beyond Photography (Yale University Press, 2013), and co-curated an exhibition on Talbot in 2010 at the Wren Library, University of Cambridge. She has curated exhibitions on early photography, on antiquarianism and architectural photography, and on social portraiture in post-1945 British photography.
Ongoing projects include: a book project on the laboratory as image archive in the modern physical sciences; a material history of Talbot’s photographic publication, The Pencil of Nature, in collaboration with conservation scientists at Yale’s Institute for the Preservation of Cultural Heritage;  Fixing and Fading: Photographic Histories, an exhibition and book on the science and aesthetics of fading in 19th-century and contemporary photography; and OUT OF PLACE, a series of experimental installations involving re-situating objects from Yale’s natural history collections. The first of these, OUT OF PLACE:  A British Mineralogy, involving a collaboration with Indian artist Garima Gupta, will be on view at the Yale Center for British Art from April - August 2021.
Books
Selected exhibitions
Selected articles and book chapters
Courses Taught
Additional NavigationClose