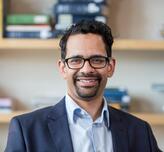 Bio:
Sunil Amrith is the Renu and Anand Dhawan Professor of History, and current chair of the South Asian Studies Council. His research focuses on the movements of people and the ecological processes that have connected South and Southeast Asia. Amrith’s areas of particular interest include environmental history, the history of migration, and the history of public health. Amrith is the recipient of the 2022 A.H. Heineken Prize for History, a 2017 MacArthur Fellowship, and the 2016 Infosys Prize in Humanities.
Amrith’s most recent book is Unruly Waters (Basic Books and Penguin UK), a history of the struggle to understand and control the monsoon in modern South Asia. It was shortlisted for the 2019 Cundill Prize, and was reviewed in Nature, The Economist, The Wall Street Journal and The New York Review of Books. His previous book, Crossing the Bay of Bengal: The Furies of Nature and the Fortunes of Migrants (Harvard University Press, 2013) was awarded the American Historical Association’s John F. Richards Prize in South Asian History in 2014, and was selected as an Editor’s Choice title by the New York Times Book Review. He is also the author of Migration and Diaspora in Modern Asia (Cambridge University Press, 2011), and Decolonizing International Health: South and Southeast Asia, 1930-1965 (Palgrave, 2006), as well as articles in journals including the American Historical Review, Past and Present, The Lancet and Economic and Political Weekly. Amrith serves on the editorial boards of the American Historical Review and Modern Asian Studies, and he is one of the series editors of the Princeton University Press book series, Histories of Economic Life.
Amrith is currently writing The Ruins of Freedom, an environmental history of the modern world to be published W.W. Norton and Allen Lane, as well as in Chinese, Korean, Italian, Dutch, German, and French translations.
Current collaborative projects include research with Professor David S. Jones (Harvard University) on the history of air pollution and health in India.
Professor Amrith welcomes inquiries from prospective graduate students interested in working on any aspect of modern South and Southeast Asian history.
Before coming to Yale, Amrith was the inaugural Mehra Family Professor of South Asian History at Harvard University from 2015-20, where he also served as co-director of the Joint Center for History and Economics, and Interim Director of the Mahindra Humanities Center (in 2019-20). From 2006-2015, he taught at Birkbeck College at the University of London. Sunil Amrith grew up in Singapore, and received his undergraduate and graduate degrees from the University of Cambridge.
Period:
Modern
Recent
Geography:
Global/International
Indian Ocean
South Asia
Southeast Asia
Thematic:
Economic
Empires & Colonialism
Environmental
Science, Technology, Medicine
Spatial/Geographic
Additional NavigationClose