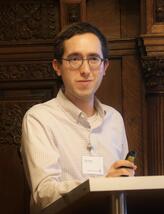 Bio:
Theodore (Teddy) R. Delwiche is a second-year PhD student. His research interests lie at the intersection of early modern European intellectual history, colonial America, and classical reception studies. He is particularly interested in the historical practices and purposes of classical education, the history of the book, history of the humanities, and the history of knowledge more broadly.
Peer-reviewed publications of his have appeared in The New England Quarterly, History of Universities, Lias: The Journal of Early Modern Intellectual Culture and its Sources, Ambix: The Journal of the Society for the History of Alchemy and Chemistry , Modern Intellectual History, and Humanistica Lovaniensia: Journal of Neo-Latin Studies. Forthcoming publications include an original critical edition and translation (c. 75 pages) of a colonial American student’s Latin declamations for The Harvard Library Bulletin, an article on and census of colonial American shorthand manuscripts for Manuscript Studies: A Journal of the Schoenberg Institute for Manuscript Studies, an article on student shorthand notetaking and ministerial training for The Huntington Library Quarterly, and an article on early modern student notetaking practices for Erudition & The Republic of Letters. He has also written scholarly reviews for The Classical Outlook and is preparing two more for History of Universities and Bryn Mawr Classical Review. For copies of his work, along with an updated version of his cv, see here.
Currently, Teddy is working on his dissertation, provisionally titled “The Contested Classics: Education in Early North America, 1630-1830.” He is also working on editing a variety of original Neo-Latin texts written by American men and women.
Teddy received his research master’s degree (English equivalent: MPhil) in early modern history at the University of Groningen (the Netherlands) in 2020 and his bachelor’s degree in classics at Harvard College in 2018. He also completed summer coursework, and the year-long fellowship program at the Accademia Vivarium Novum in Frascati, Italy (2017). His research to date has been generously supported by over 25 different grants, fellowships, and awards.
Additional NavigationClose